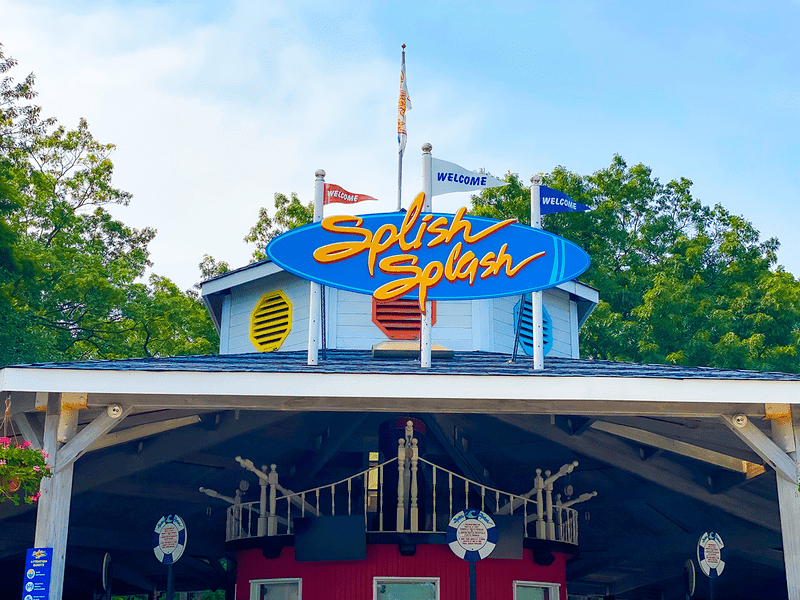 Voted one of the Best Water Parks in America by the Travel Channel!

"Splish Splash has been a family destination for 30 years.

Splish Splash has 96 exciting acres of total fun for the whole family. Everywhere you turn, you discover another one-of-a-kind water attraction. Year after year, families come here for a summer like no other!

Splish Splash continues to carry family needs as its number one priority. From attractions, shows and various dining options, Splish Splash aims to make every guest’s water park experience one to remember.

Splish Splash is one of the best places to visit in Long Island with Kids and is voted one of the Best Water Parks in America by the Travel Channel! With 96 exciting acres of family fun, everywhere you turn you will discover another one-of-a-kind water attraction.

Thrill seekers will have a blast venturing through rides and slides such as, Alien Invasion, Abyss, and the unique water coaster, Bootleggers run. For the more mild riders and those seeking a relaxing experience, the wave pools, rivers and pools are the perfect places to stay cool. Children will love splashing their way through the four kiddie areas: Yellow Submarine, Octopus Pool, Kiddie Slides and Pirates Cove.

There are plenty of food options available at Splish Splash suitable for every appetite and diet. The Boardwalk is one of the best places to go in-park for a variety of restaurants. At The Boardwalk, you can find delicious dishes from Tony's Italian Feast, Fry World, Kowabunga Kitchen, and Chicken Coop. There are also several food kiosks and stands conveniently located around the park.

No matter what your age, there is no better place to host your next birthday party than Long Island's water park. We take care of the planning, set up, and logistical details so you can enjoy the day as much as your child.

Looking for family-friendly places to visit in New York this summer? Splish Splash is fun for everyone in the family! With Single Day tickets, enjoy a day of water rides, relaxation, and family fun."

A Little Splash of History…Once a vast farmland on the east end of Long Island, Splish Splash is now the largest waterpark in the Tri-State area, spanning over 90 acres.

Splish Splash opened in May 1991 and guests were immediately delighted at the beautiful 32 acre water park which contained 2 tube slides, 3 body slides, a family raft ride, 2 speed slides, a 1300 foot “lazy river”, 2 kiddie pools and a restaurant. Besides the thrilling rides, the magical atmosphere of the park fascinated visitors.

Splish Splash introduced “The Abyss”- an enclosed, twisting tube ride. Also added to Kiddie Cove was the elephant pool. A gigantic elephant with a slide that kids could enjoy

In 1993, the exciting “Barrier Reef” was born. This “Jaws” themed ride proved to entice riders with the themed music and waiting area.

In 1994 “Shotgun Falls” was built. This western themed slide takes riders down a short, fast slide where they are dropped 10 feet into a pool. Shotgun Falls quickly became a park favorite to many visitors.

In 1995, its fifth year of operation, Splish Splash unveiled the 20,000 square foot wave pool, which boasted gigantic waves that guests could enjoy. This became a popular area for everyone. Children and adults could enjoy the wave pool whether they wanted to relax on the beach or swim through the amazing waves.

In 1996, we introduced a ride for the biggest thrill-seekers out there. The “Cliff Diver” is an 80-foot tall speed slide that is so fast and steep that it is sure to thrill every rider. Those who accept the challenge plummet down the slide at such a high speed that it is over in the blink of an eye. Most riders spectate at the bottom, watching in awe and cheering as each person makes it down.

In 1997, Splish Splash unveiled its tram system and new parking area. This system allowed for more guest parking and the convenience of a tram to transport them to and from their vehicles.

In 2002, Splish Splash built one of its most spectacular rides. The “Hollywood Stunt Rider” is a Hollywood themed enclosed family ride, complete with an interactive water show for guests to enjoy while waiting in line. Legendary film director “Irving Fabrezio” is an animatronics figure that narrates the show, as he attempts to audition guests for his latest blockbuster.

In 2004, we added the Dragon’s Den, which opened to rave reviews. Dragon’s Den is a breathtaking answer to those on a quest for maximum thrills. You’ll catapult through mysterious darkness and then plummet into the mist-shrouded abyss of the dragon…only to vanish from sight. This is an absolute must-see attraction.

In 2006, Splish Splash added its second most popular attraction Alien Invasion. A ride that will send chills through your bones as you enter the 40 foot funnel!

In 2009 Dr. Von Dark’s Tunnel of Terror was built! Riders brave this one-of-a-kind dark ride, on a two-person WhirleyWheel tube that spins freely while descending four stories in total darkness, accelerating them toward a giant funnel. Seemingly out of nowhere, the bottom drops out and riders are driven skyward into the upper hemisphere of the enclosed Tornado Flume. Surprises await at every turn as riders crash through images eerily projected onto strategically placed water curtains. Dr. Von Dark’s Tunnel of Terror—the definitive answer to the ultimate question of courage: You’re not afraid of the dark, are you?

In 2010, The Splish Splash Diner was added; offering made to order burgers and shakes and in 2011 the diner became Johnny Rockets serving those All-American favorites.

A second wavepool was added, Kahuna Bay. Also added were private rental VIP cabanas built alongside Kahuna Bay giving Splish Splash that resort atmosphere that guests covet. What better way to relax and catch some rays then by enjoying your own private cabana poolside.

In 2012, Splash Landing was re-themed and Dinosaur Falls roared into life. Grab your raft for a daredevil expedition into the wilds of prehistory. Fortunately, the water runs fast, so you should keep just ahead of the dinosaurs. Be warned: the only thing bigger than their teeth is their appetite! Use the speed slides for a quick escape. Also new in 2012, Splish Splash offered their guests the opportunity to reserve your time and wait less in line. This all new Splish Splash virtual ride reservation system holds your place in line, so you can spend more time having fun and less time waiting for our most popular attractions.

In 2013, Bootlegger’s Run debuted at Splish Splash and was the first ever water coaster ride in the state of New York featuring new generation hydromagnetic technology. Bootlegger’s Run takes four-person rafts uphill, just like a theme park coaster, for a series of breathtaking drops, including one from nearly five stories high.

2016 the Picnic Grove at Kahuna Bay debuts; with 5 large private pavilions, activity areas, and catered food selections to make an ordinary picnic an extraordinary event. From groups of 50 to over 1,200, we’ll help you entertain your group in style.

Pink's-“A Hollywood Legend”- Made famous for their fabulous Hot Dogs. This location at the end of our boardwalk, will be serving a variety of Hot Dogs, Burgers and Fries.

Also added for the 2016 season is a new 2500 square foot retail store, East End Surf Company. This store will offer a wide variety of merchandise, including apparel, swimwear, souvenirs, plush, and toys. There will also be an entire section dedicated to one of our bestselling lines, the Licensed Lifeguard Products. East End Surf Company will have everything you need to enjoy and remember your visit to Splish Splash.

Brand new to 2018, Splish Splash is pleased to announce the highly anticipated grand opening of our two new attractions - Riptide Racer and Bombs Away.

Four guests line across the top of the slide, preparing to race for the title of “Ultimate Riptide Racer” then head first on mats, guests are drenched as they charge down the enclosed flumes in a wetter-then-wet mad chase for the finish line! This super slick, mat slide is aerodynamically-designed to achieve maximum speeds.

Step up to the pulse-pounding plunge of the new Bombs Away. Choose your drop tube and feel the anticipation build until…the floor disappears from under you! Pick your thrill with 300 feet of soaking, screaming fun of the new dual drop slide

In 2021, we made a big splash as we celebrated our 30th season of family fun! After being closed in 2020 due to the pandemic, we were thrilled to see so many smiling faces back in our park. We love hosting birthday parties with our guests -- especially when it's our own!

After celebrating our 30th season last year, we didn’t rest on our laurels. In fact, exciting changes will make 2022 another memorable year.

Introducing Hyperlight, a new attraction perfect for thrill-seekers who will love every second as they travel down and around to the pulse of vivid light and dynamic sound. Formerly a twisting tube ride known as The Abyss, Hyperlight is a light and sound experience not to be missed.

It’s in the Cards

Splish Splash is now cashless and accepts only credit, debit and prepaid cards or secure mobile payments. Anyone with cash can use kiosks throughout the park to convert up to $500 cash into a prepaid card. The cards can also be used free of fees outside the park anywhere cards are accepted.

Have Your Cake and Chicken, Too

There are exciting new food and drink options. After experiencing Hyperlight, guests can enjoy fried Oreos, funnel cakes, popcorn and cotton candy as part of our all-new Hyper Bites. Funnel cakes are also available on our main restaurant deck. Try them plain or with chocolate syrup, whipped cream or strawberries. Our Chicken Coop has returned, offering our famous fried chicken and popcorn chicken. (Don’t forget the cheese fries!) Once you’ve flown the coop, stop at RiverView Too to enjoy beer and pretzels on our restaurant deck.

A redesigned retail location, the Long Island Surf & Supply, in the Main Plaza sells everything you need at the start of your visit. 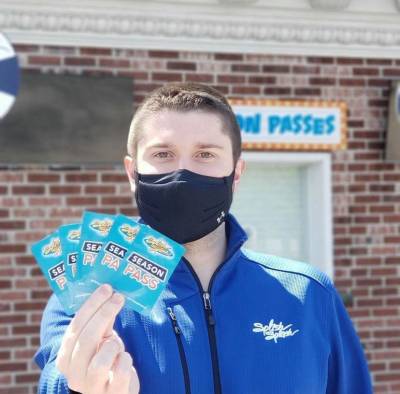 Season Passes as low as